Luca Pacioli and the History of Bookkeeping and Accounting

Bookkeeping might seem a like dull subject. But it didn’t leap fully formed out of a weighty textbook. People have needed to keep track of their money for centuries, and the bookkeeping methods we use today can be traced back to one very influential man.*

*Source: A Brief History of Bookkeeping by Oruk Duke 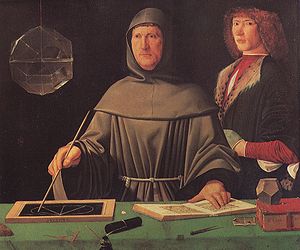 From Barter to Charter

Bartering was the dominant practice for traveling merchants during the Middle Ages. When medieval Europe moved to a monetary economy in the 13th century, merchants depended on bookkeeping to oversee multiple transactions at the same time. One important breakthrough took place around that time: the introduction of double-entry bookkeeping, which is defined as any bookkeeping system in which there was a debit and credit entry for each transaction.

At around this time we meet our hero. You may not have heard of him, but Luca Pacioli was one of the greatest men of the Renaissance. He is also one of the least well known. This is surprising because it’s no exaggeration to say that Luca Pacioli’s manuscripts and ideas changed the world.

Luca Bartolomes Pacioli was born about 1445 in Tuscany. He was a renaissance man in the truest sense of the expression, acquiring an amazing knowledge of subjects including religion, business, military science, mathematics, medicine, art, music, law and language.

He believed in relating these widely varying disciplines and making them work together in harmony. His friend Leonardo da Vinci helped prepare the drawings for Pacioli’s 1497 work, Divina Proportione; in turn, Pacioli is reputed to have calculated the quantity of bronze needed for Leonardo’s huge statue of Duke Lidovico Sforza of Milan.

In 1494 Pacioli published his famous book Summa de Arithmetica, Geometria, Proportioni et Proportionalita (The Collected Knowledge of Arithmetic, Geometry, Proportion and Proportionality). One section in the book made Pacioli famous -Particularis de Computis et Scripturis, a treatise on accounting later described as “a catalyst that launched the past into the future”. Pacioli was the first person to describe double-entry accounting, also known as the Venetian method. This new system was state-of- the-art, and revolutionised economy and business.

The systems set out in Pacioli’s book are almost identical to those in modern ledgers. Entries consisted of brief paragraphs; debits were on the left side of a double page, credits on the right. The trial balance was the end of Pacioli’s accounting cycle. If the credit and debit columns were not equal then that “would indicate a mistake in your Ledger, which mistake you will have to look for diligently with the industry and intelligence God gave you.”

Pacioli’s treatise gave instructions in how to record barter transactions and transactions in a variety of currencies – both being far more commonplace than they are today. It also enabled merchants to audit their own books and to ensure that the entries in the accounting records made by their bookkeepers complied with the method he described. Without such a system, all merchants who did not maintain their own records were at greater risk of theft by their employees and agents: it is not by accident that the first and last items described in his treatise concern maintenance of an accurate inventory.

It was a complete how-to document for the businessman of the day. As the man himself put it:

“Accounts are nothing else than the expression in writing of the arrangement of his affairs. If he follows this system always he will know all about his business and will know exactly whether his business goes well or not.”

Doing It The Italian Way

Pacioli’s work was so influential that it was soon copied, translated and spread all over Europe. It was usually presented with the additions of other authors. The Quaderno doppio of Domenico Manzoni da Oderzo was a particularly popular example – it enjoyed no less than seven editions between 1534 and 1574. The Quaderno is notable the first book to use a realistic ledger as a teaching aid. It tracks a year in the life and fortunes of a Venetian merchant, Alvise Varesso, with daily ledgers and inventories down to the penny. It’s hugely detailed and pioneered the use of real examples in accountancy teaching, a technique still used today.

Pacioli’s work was greatly respected, and eventually he was elected Superior of his order. By the time of his death in 1517 he was one of the most famous academics of the era, well known to many of the great Renaissance figures of his day. These days he’s not quite so famous but the accounting principles he popularised are a vital part of modern business. So next time you log an invoice, spare a thought for Luca Pacioli!